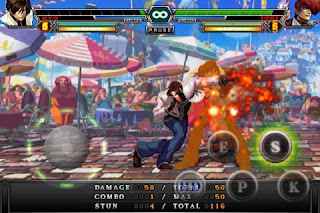 King of Fighters on iOS devices just got beefier.

SNK Playmore has released the update to King of Fighters-i (KoF-i). The update is titled KoF-i 2012. Featured in the new version are 12 new characters, online play, new artwork, and trading cards.

Like many iOS fighters, KoF i-2012 utilizes a virtual joystick. You can play the game on iPad, iPhone, and iPod Touch.