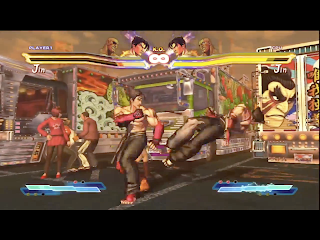 Capcom has announced a date for Street Fighter x Tekken's (SFxT) upcoming balance patch. It will be available on Xbox 360 and PSN on May 16. The patch aims to remove infinites and nerf some overpowered moves.

The company revealed changes this balance patch would bring back in late April. See a list of those changes after the jump.


Kuro cr.MP infinite has been removed.


Pacman Hit back on LP and LK has been changed so infinite has been removed.


Jin Chop Kick Glitch on mid air opponents has been fixed.
When first hit of Kazama Style 6 Hit Combo is a counter hit, Jin is at +2F now.

Ogre Damage properties of cr.HP have been changed so follow ups are now not possible.


Juri Senpusha's frames on block have been changed to below:

Hurt box added to his feet and the move no longer crosses up easily.

Frames on block have been modified to -4F

Jump/lever input bug Addresed issue where diagonal inputs/jumps did not come out properly.

Throw/Character Change glitch Fixed a bug for certain characters that allowed for them to get thrown when initiating a character switch.

Quick Combo Priority of command inputs has been changed so glitches that came from activating quick combos in the air have been removed.
Posted by Fernando Quiles Jr.