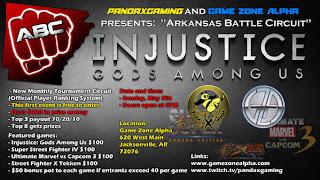 The first Arkansas Battle Circuit event will take place today and is being streamed by PandaxGaming. Watch the tournament event live inside.

The first Battle Circuit event in Arkansas is being hosted by PandaxGaming at Game Zone Alpha in Jacksonville today (May 5). Festivities of the event will begin at 5 p.m. ET. Stream testing will be done before the event starts.

Titles that will be featured are as follows: Injustice: Gods Among Us, Super Street Fighter IV: Arcade Edition 2012, Street Fighter x Tekken 2013 and Ultimate Marvel vs. Capcom 3.

Here is the live stream and chat.