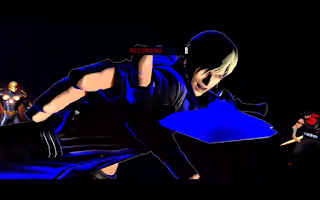 "Careful consideration" was put into a decision on the Ultimate Marvel vs. Capcom 3 dead character snapback glitch at Evo 2013. The team behind the mecca of fighting game tournaments has decided to do away with the exploit.

Well it was nice knowing you.

A recent Ultimate Marvel vs. Capcom 3 glitch has been the talk of the week for the fighting game community (FGC). The dead character snapback glitch was found and it enables three characters on the screen at once. The player who performs the glitch successfully has the ability to do damage to two characters at once but also runs the risk of getting double teamed.

While the glitch is still fresh in the minds of the FGC, the Evo 2013 crew has already made a decision on whether or not the glitch will be a part of the tournament. The answer is no as seen in Joey "Mr. Wizard" Cuellar's tweet below.

After careful consideration from the Evo team, the new Marvel snapback glitch is banned in tournament play at Evo.
— Joey Cuellar (@EvilMrWizard) May 9, 2013