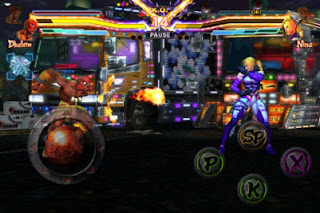 At E3 2012, Capcom quietly unveiled Street Fighter x Tekken (SFxT) Mobile. The game will be available for iOS 5 devices and higher this summer.

While news has been scarce for the most part, Capcom hinted at a new tag system. What that entails has been revealed. A post on the Capcom blog contains details on the new tag system. The goal of SFxT Mobile matches will be to eliminate the primary character.

Secondary characters are used for a limited time to help the primary fighter regain health. Pandora Mode makes its return, only this time the secondary character is lost after eight seconds, leaving the main fighter a lone wolf.

Read more on the new tag system, after the jump.


Interestingly, the secondary character has no actual life bar - taking damage merely eats away at the Partner Gauge, shortening the amount of time they're in the battle before being forced back out. They can't be "beaten," merely shoved back out of the match while the Partner Gauge refreshes. This forces your main character back in early, limiting the amount of health they recovered.

Pandora Mode still sacrifices one character to empower another, but in SFxT Mobile using it doesn't have to mean the end of the match. Here, you only lose your secondary character; once the eight seconds are over, your primary character is still alive, just without the ability to tag out for a health recharge."