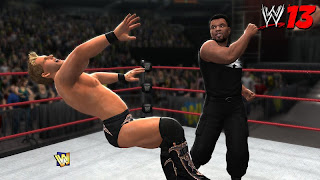 THQ announced former undisputed boxing champion and WWE hall of famer, Mike Tyson will be available as a playable character if you pre-order WWE '13. Tyson's appearance resembles his Wrestlemania 14 look back in 1998.

Tyson's spot on the WWE '13 roster should come as no surprise given his relationship with WWE and the upcoming THQ grappler's dedication to the Attitude Era. Now fans can recreate highlight reel moments from the "Baddest Man on the Planet."

So where can you make the pre-order? The first and obvious route to go is the THQ store. If Amazon is your go-to online retailer, you can also snag a pre-order here. If shopping online isn't your thing and you'd rather do it in a store, visit Gamestop and make it happen.

Watch the official trailer for Tyson's WWE video game debut, after the jump.