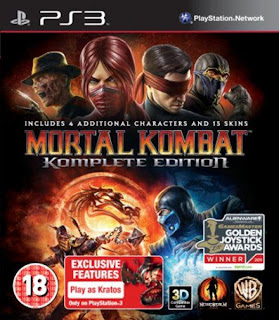 The BBFC has revealed that a Mortal Kombat Komplete Edition will be available in North America on Feb. 19, 2012.

This edition will include Skarlet, Kenshi, Rain and Freddy Krueger, who are DLC characters. 15 character skins will also be included.

While the original report only mentioned an Xbox 360 version, Gamepur has revealed the boxart of this edition of Mortal Kombat 9 (MK9) and it's for the PlayStation 3 (PS3).


Since the game sold well on both consoles, it should come as no surprise that both versions of MK9 will receive the Komplete Edition.

The boxart has a sticker on it, touting its Golden Joystick Awards honor for best fighting game of 2011. PS3's boxart also reminds fans that Kratos is an exclusive character on the Sony console.

A price has not been revealed as of this writing.
Posted by Fernando Quiles Jr.