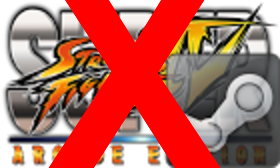 Ultra Street Fighter IV is coming to PC, yet Capcom still hasn't fixed their Steamworks transition blunder. This doesn't bode well for the future of the series on PC.

Perhaps Capcom is waiting for an invitation.

Ever since moving Super Street Fighter IV: Arcade Edition 2012 (AE 2012) from Games For Windows Live to Steamworks on May 30, the PC version of the game has played like crap. Capcom has released two patches since the transition. The first patch addressed issues with sound and region restrictions. Their second patch was far less effective, taking care of the loud announcer and other minor details.

Neither patch fixed the most glaring issue, the game's lag. Players have been suffering from both online and even offline lag. A quick glance at the Steam Community forums will show you tons of disgruntled users experiencing these issues.

Despite being ever so lazy when it comes to fixing these problems, Capcom still expects players to pay $14.99 for the Ultra Street Fighter IV (USFIV) upgrade. The release date is set for August 8, yet Capcom has done nothing to convince myself and others that they deserve the money.

It's a shame because the PC community has been polite to AE 2012. A look over on Steam Charts shows an average of 898 players over the last 30 days. That's despite the game being a broken mess. Whether or not USFIV sees the same success remains to be seen. One thing's for certain, PC gamers don't forget when companies screw them over.

Why hasn't Capcom fixed the game they broke? Why do I have to open up Task Manager every time I start up AE 2012 to get it to run smoothly? Why should I even have to write an article such as this one?

The answer is simple, it's Capcom.
Posted by Fernando Quiles Jr.