NYCC 2013: Nintendo wants people to 'see why the Wii U and 3DS are systems worth having' 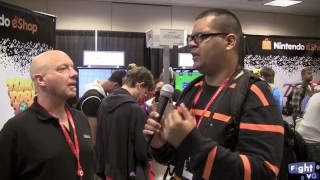 Nintendo pulled out all the stops at the New York Comic-Con 2013 event. See FightVG's exclusive interview with Nintendo's David Young.

The 2013 New York Comic-Con event has concluded. It took place from Oct. 10 through the 13th at the Javits Center in New York City. During the event, Nintendo showcased their upcoming titles for the holiday season and 2014.

“In our downstairs room, we’re highlighting some great games for Nintendo eShop both on Wii U with Bit.Trip Runner2, Toki Tori 2, a little Shovel Knight and also some great titles on the 3DS you can get through eShop, Shantae, some of the Zelda games, SteamWorld Dig, some really great things are available for download,” Nintendo of America’s Assistant PR Manager David Young said.

Young said he believes it’s vital to get independent developers to know that the Wii U and 3DS are viable platforms to put their products on.

While numerous trailers and gameplay videos over the years have surfaced from Nintendo, Young said he feels potential consumers get true satisfaction when an upcoming game is in their hands early.

“The magic of Nintendo games, both 3DS and Wii U, is in playing them, it’s great to see videos and it’s great to get reviews and we love you guys for talking about our products, but really getting hands-on is where the magic happens, so we like to come to PAX, we like to come to Comic-Con, all the events where the people who love games come out and get a chance to get hands-on before they come out, upstairs there’s Donkey Kong: Tropical Freeze, Super Mario 3D World, Sonic Lost Worlds, Bayonetta 2, so people can see why the Wii U is a system worth having, why the 3DS is a great system,” Young said.

Below is the full interview with Young.