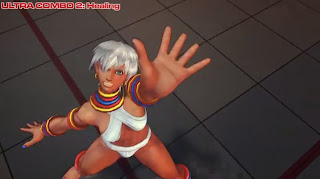 The four characters that have already been revealed for Ultra Street Fighter IV, have now had their super and ultra combos unveiled. Watch them inside.


Capcom has posted the new super and ultra combos for Poison, Rolento, Elena and Hugo in Ultra Street Fighter IV. Maximilian took each clip and put them together for one video. It's interesting to note that Elena's second ultra allows her to heal, an ability that is unique to the character.
Posted by Fernando Quiles Jr.