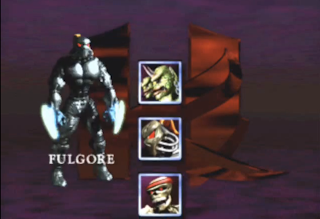 It's all but confirmed that Fulgore will be the final character in Killer Instinct's first season. View the picture that leaks Fulgore inside.

Is there a plumber in the house?

Penny Arcade posted some images of the Killer Instinct Pin Ultimate Edition. One of the images revealed a character list with Fulgore's name on it. The site has since covered Fulgore's name, but IGN posted the image seen prior to the cover up.