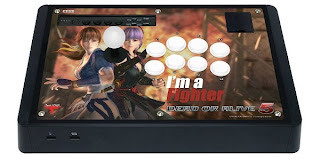 Tecmo Koei is taking over in September.

Dead or Alive 5 (DoA 5) is set to be released Sept. 25 for Xbox 360 and PS3. If you were hoping for a fightstick to go with the upcoming fighter, Hori is granting your wish.

Play-Asia has pegged Hori's DoA 5 fightstick to be released on Sept. 27. The price listed on the site is $249.90. This could just be an estimate as Play-Asia tends to change prices before products hit the market.

No word on when the stick will land in North America.
Posted by Fernando Quiles Jr.