No Guts No Glory: Why casual gamers shouldn’t shy away from the fighting game community 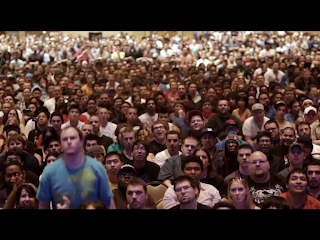 You never know until you try.

The fighting game community (FGC) has been going strong for years. Gamers from all over the world have joined forces as a result of a single bond … their love for fighting games. It’s that love that has made players spend years practicing to become successful in tournaments.

We’ve seen tournament play grow from small bets in the Arcades to live HD streams with thousands of dollars on the line. Now sponsors make it easier for competitive players to make trips to regional tournaments and of course the mecca of them all, Evo.

So with all the success and the growing popularity of the FGC, why are casual gamers afraid to dip their toes in the water? If it’s because they feel like they’ll get chewed up and be the laughing stock of the century, then they are mistaken. Casual gamers can learn to embrace and enjoy being a part of the community, but how?

Casual fighting game players who want to take their game to a higher level usually don’t know where to start. The obvious choice here would be YouTube. Watching high level tournament play from the start may be discouraging and can lead to the gamer losing interest quickly. Basic tutorial videos are the best way to go. It doesn’t matter if the game is Street Fighter x Tekken (SFxT) or Ultimate Marvel vs. Capcom 3 (UMvC3), a simple guide should always be the starting point.

Once the casual fan is able to grasp the basics, the second part comes in. It seems simple enough to surf around the Internet and ask for help, but asking a simple question to advanced players can be intimidating. The approach a rookie should take is ‘no question is a dumb question.’ This goes for anybody who is learning something new. If websites like SRK, EventHubs, or VersusMatch seem too advanced, try GameFaqs. The site is popular and is home to casual, intermediate, and advanced players.

If the player has passed steps one and two, step three will test that gamer’s longevity. This is where heart and determination will come into play. The first few tournaments will probably be brutal. Despite learning from various websites and practicing for hours, you’ll never truly learn how to dish out punishment if you don’t receive it first. Nobody is invincible. Even pro players such as Justin Wong, F. Champ, Chris G, and others have off days. Live and learn from your mistakes to improve and stay ahead of the pack.

So if you’re the casual gamer I’ve talked about, will you rise to the occasion or falter?
Posted by Fernando Quiles Jr.