THQ: We will have a much more solid DLC plan for UFC Undisputed 3 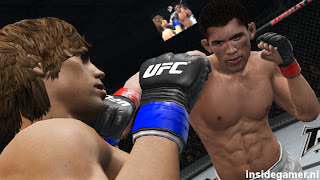 No Joe Lauzon? No Anthony Johnson? No Matt Mitrione? What gives?

THQ has revealed that not only will there be DLC for UFC Undisputed 3, but it will also be better than previous years.

If you pre-ordered UFC Undisputed 2009 from GameStop, you received a code to download The Ultimate Fighter (TUF) season 8 winners Ryan Bader and Efrain Escudero.

Pre-ordering UFC Undisputed 2010 got you TUF season 10 heavyweights Roy Nelson, Brendan Schaub, James McSweeney and Marcus Jones. Those who didn't pre-order had to wait a little under four months to have access to DLC.

Much like the two previous Undisputed titles, the third installment also has an exclusive pre-order deal with GameStop. If you choose to pre-order, you will receive a code to the "Contender Fighters Pack".

Whether THQ wants to handle DLC like they will with WWE '12 remains to be seen.
Posted by Fernando Quiles Jr.