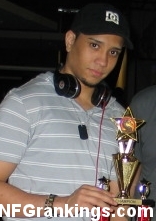 Mortal Kombat 9 pro Emmanuel Brito, better known as CD Jr, told Test Your Might that he has signed with vVv Gaming. CD Jr will join Krayzie and second place runner-up at Evo 2011 REO.

vVv Gaming is a competitive video game organization. Besides Mortal Kombat, the organization also has a team for Super Smash Bros. Brawl.

Recently, CD Jr changed his twitter account to "vVv_CDJr." He says after an interview with vVv Gaming, the deal was set in stone.

Expect an announcement on the signing of CD Jr within the next week on the organization's website.
Posted by Fernando Quiles Jr.