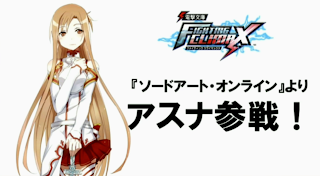 Sega announced their upcoming 2D fighting game at the Tokyo Game Show. Get the scoop inside.

Well this came out of left field.

Sega appeared at the 2013 Tokyo Game Show and announced (via Feed_rss) their new 2D fighting game, Dengeki Bunko Fighting Climax. Sega is working with Ascii Media Works on the project.

There has been no word on which platform(s) the game will be available on. A release date, price and whether or not the game will drop in North America have also not been revealed.

What has come to light are the first two characters showcased for Sega's upcoming fighter. Sword Art Online’s Asuna, and Shana from Shakugan no Shana have been confirmed (via NeoGAF).
Posted by Fernando Quiles Jr.