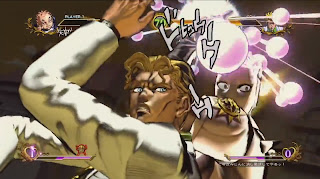 Not only will an infinite patch be coming to JoJo's Bizarre Adventure All-Star Battle, but so will a free DLC character. Get the lowdown inside.

The official website of JoJo's Bizarre Adventure All-Star Battle (via EventHubs) posted an announcement regarding the game's infinite combos. A patch is coming Sept. 10 to get rid of the infinites. Other bugs will be fixed as well.

CyberConnect2, developers of All-Star Battle, will also be dishing out upcoming DLC character Pannacotta Fugo on Sept. 12. The character will be free of charge due to the positive response from fans to All-Star Battle.
Posted by Fernando Quiles Jr.