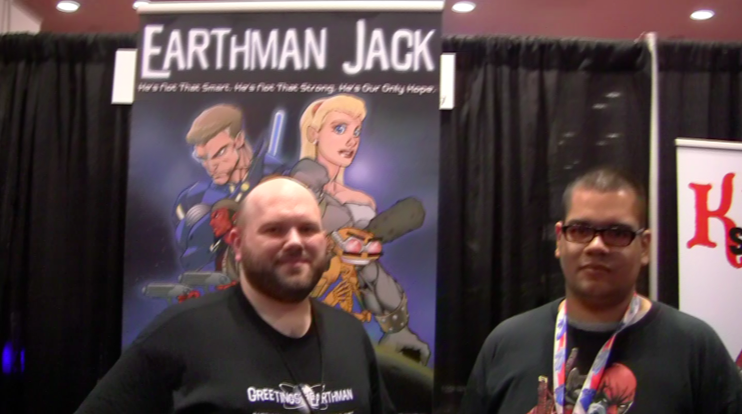 FightVG caught up with "Earthman Jack vs. The Ghost Planet" author Matt Kadish at the 2014 NYCC event. Check out the interview inside.

Kadish said there were a few differences between NYCC and other conventions.

“This is the second biggest Comic-Con in the country next to San Diego,” Kadish said, “A lot of the other conventions are a little bit smaller, a bit more intimate. Here you get a bunch of the celebrities, a lot of the previews of movies and TV shows. This one is a nice little mix of stuff.”

Kadish said he wanted to stray away from modern day science fiction with “Earthman Jack vs. The Ghost Planet.”

“One of the things I wanted to do when I set out to write this book was I wanted to take all the stuff I loved growing up in the 80s and early 90s and mush it up into a ball and say, ‘what would this story by like if Steven Spielberg directed it?’” Kadish said, “I wanted to make a love letter to all that stuff I had growing up that a lot of kids nowadays don’t have. All the sci-fi I see is gritty, kind of pessimistic and dark.”

Kadish has received positive feedback from sites such as Amazon for “Earthman Jack vs. The Ghost Planet.” He said he appreciates the positive response.

“My ego just keeps getting bigger and bigger, so I’m becoming harder to be around,” Kadish said jokingly, “It feels great. Whenever you’re an artist and you put yourself out there, you always worry about, ‘oh are people going to like this?’ so every time someone reads it and leaves a review and it’s five stars and they just can’t say enough about it, it makes you feel good. It inspires me to keep going.”

Outside of being a comic book author, Kadish also writes for the London Film Review.

“I tend to write articles about upcoming movies. I did an article about the top seven reasons Michael Bay’s ‘Teenage Mutant Ninja Turtles’ is going to be good, unfortunately I think I was way off the mark on that one,” Kadish said, “I also talk about some movie news, like we had a bunch of stuff about Netflix’s ‘Daredevil’ that I was covering.”

Kadish revealed where readers can purchase “Earthman Jack vs. The Ghost Planet.” “You can get it on Amazon.com, Barnes & Noble, iTunes, pretty much anywhere eBooks are sold,” Kadish said. “Starting next year, we’re going to be in book stores across the country.”
Posted by Fernando Quiles Jr.